The Age of Lukewarmness

Click this audio file to listen to his blog.

The Age of Lukewarmness

“Behold, I stand at the door and knock. If anyone hears my voice and opens the door, I will come in to him and eat with him, and he with me” (Revelation 3:20).

The church at Laodicea was lukewarm and in danger of being rejected by Jesus. The problem was clear. Jesus wasn’t inside. He was knocking at the door, but no one was answering. They were having meetings and doing church activities, but Jesus was proverbially “on the outside looking in.” How could this be? Surely they wouldn’t attend a meeting knowing Jesus wasn’t present. I can’t help but think of a definition of the word religion I once heard. “Religion is worship in the absence of God.”

Satan fooled the people into believing that Jesus, via the Holy Spirit, was present in the meeting, but He was not. The people were deceived. Satan specializes in counterfeits. In this case, he counterfeited Jesus. How could that happen? We don’t know, but we know that Satan employs age-old strategies. When God wasn’t present in Israel when Moses was up on the mountain, Satan inspired Aaron to make a golden calf as a substitute for God. As a result, the people held a religious meeting that sounded more like a party than a worship service.

And when Joshua heard the noise of the people as they shouted, he said unto Moses, There is a noise of war in the camp. And he said, It is not the voice of them that shout for mastery, neither is it the voice of them that cry for being overcome: but the noise of them that sing do I hear. And it came to pass, as soon as he came nigh unto the camp, that he saw the calf, and the dancing: and Moses’ anger waxed hot, and he cast the tables out of his hands, and brake them beneath the mount. (Exodus 32:17–19 KJV)

Notice that Joshua couldn’t rightly discern what the people were actually doing from a distance. God had already revealed what they were doing, “the people sat down to eat and drink and rose up to play” (Exodus 32:6 ESV). It wasn’t war; it was an idolatrous play he was hearing. Rather than worshipping Jehovah (YHWH), they were conflating the worship of Jehovah with the worship of the gods of Egypt. Paul explained this behavior in 1 Corinthians 10:7, calling it idolatry.

The Hebrew and Greek (LXX) word for play used in Exodus 32 is also used of David and the people who played before the Lord in worship in 2 Samuel 6:5-21 and 1 Chron. 13:8, 15:29. What’s the difference? The Israelites worshipped God after the manner of the gods of Egypt because their hearts were unrepentant. They never forsook the world and turned to God with all their hearts. They wanted a mixture of God and the world. Little did they realize that the Land had already spewed out the inhabitants before them for similar idolatrous behavior (Leviticus 18:27-28 KJV). 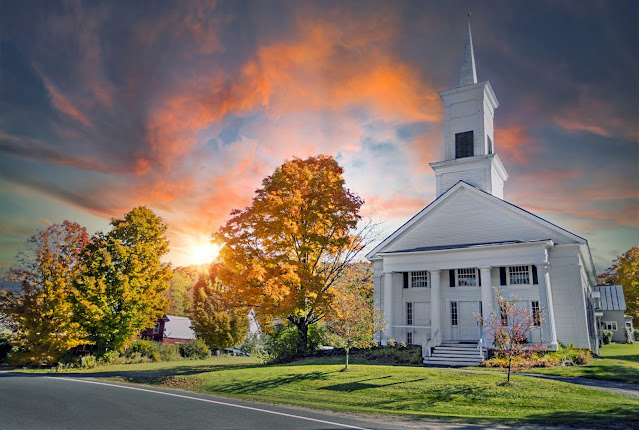 There is a similar risk in modern times when people assume that just because there is music and dancing, God is pleased with the worship or that He is even present. If a person’s heart isn’t turned to God as a lifestyle, they are not worshipping. The music or the volume doesn’t fool Jesus, though it fools many into thinking Jesus is present when He may not be. When Jesus comes, He will confront sin where it is present through the Holy Spirit. He doesn’t make people feel good and accepted while living in sin; the music itself does that. It is a counterfeit presence of Jesus that leads to lukewarmness in a Church. Sadly, everything is usually so loud and distracting that nobody could hear Jesus if their lives depended on it.

Knocking But Noone Answers

It seems almost a contradiction that Jesus was prepared to spew the congregation out of His mouth while simultaneously knocking at the church’s door. But this is the Lord offering an olive branch with one hand and a sword with the other. It all depends on the response. Jesus wanted in. He wanted to be Lord of that church. He was long-suffering. He was not willing that any of them would perish but come to repentance. Again, He came with an olive branch in one hand and a sword in the other. What would they choose?

There is a time to be loud, and there is a time to be silent. If a meeting is set up so that people can’t hear Christ, they are in the wrong place. No meeting should be so loud, so distracting, that people can’t hear themselves think or hear the voice of the Spirit. The same is true of an altar service. How can a person hear a still small voice when a speaker blasts their ears? Is there any wonder Joshua thought he heard the sound of war? Jesus is knocking at the door, and nobody can hear. No one is willing to stop and listen. How can a church be worshipping Jesus if He isn’t even there?

The Voice Calling Out

In picture language, the dealing of the Holy Spirit is demonstrated not only with a hand knocking but the voice of Christ calling. This is the Holy Spirit dealing with individuals in the churches. I can almost hear (as it were) the hand rapping against the door as the voice calls out, “Bill, Bob, Nathan, Tom… it’s me, Jesus. Won’t you let me in? I’m not here to condemn you. I’m here to bring fire. I’m here to raise the temperature in your life and save this church. I’m here, but I can’t even get your attention long enough to deal with you. You are hurling praise and worship at me, but you are not listening to me.”

Therefore, as the Holy Spirit says: “TODAY, IF YOU WILL HEAR HIS VOICE, DO NOT HARDEN YOUR HEARTS AS IN THE REBELLION, IN THE DAY OF TRIAL IN THE WILDERNESS, WHERE YOUR FATHERS TESTED ME, TRIED ME, AND SAW MY WORKS FORTY YEARS. THEREFORE I WAS ANGRY WITH THAT GENERATION, AND SAID, ‘THEY ALWAYS GO ASTRAY IN THEIR HEART, AND THEY HAVE NOT KNOWN MY WAYS.’ SO I SWORE IN MY WRATH, ‘THEY SHALL NOT ENTER MY REST’ (Hebrews 3:7-11).

Nobody at Laodicea was answering the voice. They were distracted and hardened in their ways. Everyone ignored the knocking. They turned the sound of the worship up until they couldn’t hear His voice. Just as Saul and the other religious leaders in Acts 7 always resisted the Holy Spirit, these also hardened their hearts when they heard His voice. This is what Israel did when they provoked God in the wilderness. Ignoring the voice of God when He is desperately dealing with us is the most dangerous thing we can do. Why? Because the Holy Spirit will not always strive with humankind.

Understand that Jesus could have spoken the word and that door would have vanished, or He could have walked right through it as He did in John 20:19. But He wanted an invitation. He waited for those simple words, “Come in, LORD.” Or as Samuel responded, “Speak Lord, your servant hears you.” God doesn’t want robots; He wants willing subjects. He wants sons and daughters. To become one, we must “receive Him.” Not in the modern-day falsehoods of high-speed evangelism, but receive Him to come alongside us as our savior and lord in the genuine article.

The late David Pawson once related the story of a minister who visited a poor starving woman with groceries. He knocked and knocked, and though he knew she was home, she never answered. He placed the groceries at the door and went home. Sometime later, he passed by the home and saw the woman outside. He recounted that he had visited with groceries, but no answer. She replied, “I didn’t answer because I thought you were the rent collector, and I didn’t have any money—so I didn’t answer.”

Why would someone think that Jesus comes to collect, when in fact, He has already paid the price? The old hymn says, “He paid a debt He did not owe, I owed a debt I could not pay, I needed someone to wash my sins away.” This is what Jesus did on the cross at Calvary. There is nothing to collect from us except our faith and faithfulness. We have no price to bring, simply to the cross we cling. Yet, like this poor woman in Pawson’s story, “many refuse to answer because they think He is there to demand when He has truly come to offer” (DP).

The fellowship motif is familiar in John’s writings. For example, we are told in John 14:21 that if we keep the commandments of Christ, the Son will manifest Himself to us, and Father and Son will make their abode with us (John 14:23). This is how we invite the Lord into our lives. It’s is how we answer the door. When we listen to His voice and respond in faith, we invite Him into our lives.

Notice the passage again, “If anyone hears my voice and opens the door, I will come in to him and eat with him, and he with me.” We have nothing to offer the Lord to “eat,” so He will bring provisions. Like the children of Israel, when God commanded them to eat the Passover lamb with their loins girded, we eat with the Lord (as it were) with a readiness to move out. He comes in to dine so that we might move out together; out of our metaphorical Egypt, under the blood (as it were), and into a life of faith. But it must begin with that first act of hearing and responding to His knocking and speaking.

Some churches would sing their songs so fast that everyone was worked up into a frenzy in the old days. In modern times it’s often a concert atmosphere. Could it be that for decades Jesus has been trying to get the attention of many churches, and they wouldn’t answer the door? How can a meeting (church service) go on “business as usual” and Jesus not even be present? It was true at Laodicea, and it could be true in our circles.

Moreover, could this pandemic be a means of stopping the music and the “playing” so that people can focus on hearing His knocking and responding to Him? Have our worship services become a distraction from hearing His voice rather than a platform for Him to speak to us? We need God to get our attention and hold it. We need to hear and answer the door while there is still hope.